Do Women Really Have to Work Harder Than Men for the Same Recognition?

Have you felt that you have to work twice as hard as your male colleagues to get the same recognition?

Many women commonly feel that their male supervisors and male colleagues are continuously testing them and may even doubt their capabilities. We feel we have to work harder than our male peers just to prove that we’re deserving of the same recognition. It seems that men are often judged on their potential, while women are often assessed by their achievements. It feels as if there’s an ongoing assumption that women have inferior skills or that they don’t have as much technical ability as a man in the same position would.

Men will commonly admit that they find it easier to work with men than with women, especially when it’s with a person they don’t know. Many men say that they understand and relate better to men, and some will even admit that they are generally more confident in working with men than with women. Men’s tendency to prefer working with other men is particularly evident in traditionally male-dominated fields where women don’t have as much of a long-standing presence, such as in fields of science, technology, litigation, manufacturing, automobile sales, law enforcement, or the armed services.

What men are really saying is that when they deal with other men at work, the rules and procedures are fairly simple: when men are together there are certain norms and expectations, and everyone just follows them. Lots of men wonder whether these “men’s rules” are still appropriate in the workplace, but between men, they work, and they supply men with a comfort zone. When women feel tested at work they start to work harder, longer hours, or feel that they have to outperform their male colleagues just to be acknowledged. Men tend to read this behavior the wrong way and assume women are working harder and longer because they may lack confidence and try to do too much to make up for it. Women, some men observe, “don’t know how to draw boundaries and just walk away at the end of the day.”

Avoid setting off this self-perpetuating cycle of feeling tested by establishing your credibility right at the start. Don’t wait for anyone to doubt you. You don’t need to take on any inauthentic behavior, like bullying or booming your voice. Introducing yourself in a straightforward manner, explaining who you are, what you do, and what your background is will do the trick. If you are already established, notice who or what is making you feel tested and start a conversation with the relevant person that questions this assumption.  Use the phrase “I have the assumption that you think I’m not capable of ________, and I want to check with you to see if my assumption is right.” You might be surprised what comes out of that discussion.

Bottom line – We can thrive in a masculine environment without changing who we are. If you would like more tips on how to do just that, then download my free Magnetic Influence Litmus Test where I share 4 simple questions you can ask yourself to predict your ability to influence, and how to gain that influence. 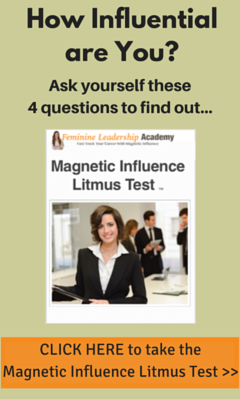